Gardening Tips: Controlling Moles and Voles in the Landscape

Find this article at:
go.ncsu.edu/readext?367026
— Written By Rob Hawk and last updated by Melissa Vaughn

It seems that lately several calls have come into the extension office mentioning mole and vole issues in the yard. No matter what time of year it is, moles or voles can be a problem. I have experienced most of my mole and/or vole problems in the winter when the weather turns mild and wet such as last December. These animals can be a major annoyance in our landscapes. They are active at all times of the year. Control can be difficult, but there are a few options. 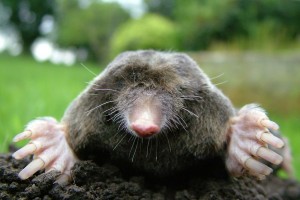 The first thing you’ll need to do is determine if your problem is truly moles or if you actually have voles, as this will determine the best method of control. Voles are small rodents that resemble mice. They primarily cause damage by feeding on the stems or roots of perennials and small shrubs in landscapes, while moles primarily feed on earthworms, grubs and other insects that are found in the soil. Only some types of voles will burrow into the ground and leave tunnels, as others prefer to move above ground. However, all voles will crawl through previously established mole tunnels. If tunnels are present, the best way to tell if they are caused by moles or voles is to look for small golfball sized holes near the tunnels. These are the holes left by voles exiting the tunnels. Moles do not leave these kinds of exit holes.

If your problem is moles, the most effective control option is to cut off the food supply. If you have moles in your yard, the chances are good that you have grubs as well. This time of year, grubs are inactive, and are burrowed deep into the soil. As they mature, they will come to the surface of the soil in April and May, before fully maturing into adult form and leaving the soil entirely. Check for grubs in April by digging out a small patch of turf and inspecting the top layer of soil for small, white, wormlike insects  If you find grubs, you can apply Sevin to the soil surface to kill the grubs. Follow all label directions when applying Sevin or any other pesticide. If no grubs are present, the moles are most likely feeding on earthworms, in which case no pesticide would be necessary for control.

Another option for controlling moles is trapping. Because moles are a wild, non-game animal, you must apply for a permit from the North Carolina Wildlife Resources Commission. Traps are most effective when placed directly in the tunnel. However, the moles will become suspicious of foreign objects in their tunnels, so you should start by stepping down the soil in the tunnels around the trap, to disguise it. If you have not caught anything in the trap after 4 or 5 days, you may want to try placing it in another location.

Because of their protected status with NCWRC, it is also illegal to use poisons or fumigants to kill moles. Some products are commercially available which claim to deter moles, but it is unclear how effective these products are. Hard as it is to believe, moles are usually solitary, meaning that there is usually only one per lawn. Obviously that one mole can make a big mess, but if you can get rid of the one, the problem is solved, at least for the moment. 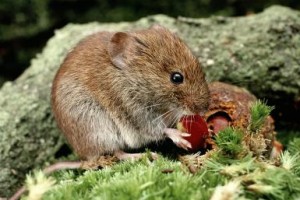 Voles are not solitary, nor are they protected by the NCWRC as they are considered a landscape pest. They can be controlled by trapping without a permit. Because they cause damage to landscape plants, it may be beneficial to use short wire guards or landscape barriers around plants of special value if you suspect you have a vole problem. A good way to catch voles is to set snap mousetraps in any tunnels near damaged plants. Bait the traps with small slices of apple, and cover them with leaves or branches. You can also discourage voles from invading your yard by keeping the grass mowed short and reducing the amount of thatch in the lawn. Another control method, if you like to walk and get exercise, simply put on your heavy boots and stomp on the ridge tunnels to flatten them.