Find this article at:
go.ncsu.edu/readext?435635
— Written By Rob Hawk and last updated by Melissa Vaughn

The current drought conditions are placing a strain on livestock due to a lack of adequate nutritional forage and feed. 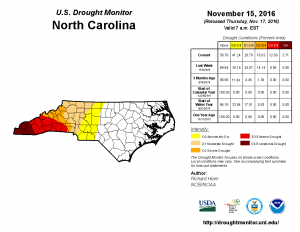 Many cattlemen have been feeding hay for sometime now, even back into mid-summer in the worst drought stricken areas from a line of Bryson City to Whittier to Sylva south. This is unfortunate because most cattlemen did not get a good second cutting of hay in late summer (50 percent-100 percent reduction) and are already into their winter hay reservoirs from the first cutting in the Spring, which was good thankfully.

Another issue has arisen in the Whittier area of Jackson County, which is also related to drought stricken pastures and stockpiled pastures. It is Acute bovine pulmonary edema and emphysema (ABPE), which is a naturally occurring illness in cattle.

ABPE is caused by an abrupt change in pasture conditions. Cows develop clinical signs of lung disease one to 14 days after the pasture change, and death often follows within two to four days after the appearance of clinical signs. Under normal stockpiling conditions the pasture change is less drastic from one pasture to another, but in severe drought conditions such as we are experiencing in Jackson and Swain counties the problem is more pronounced. Even though stockpiling for winter forage is good and recommended, there can be dangers.

The cause of ABPE occurs most frequently after cows are abruptly switched from pastures containing sparse, dry, low-quality forage to pastures containing more lush, rapidly-growing forage. The abrupt change results in the formation of an undesirable toxic end-product of ruminal fermentation, 3-methylindole (3MI). 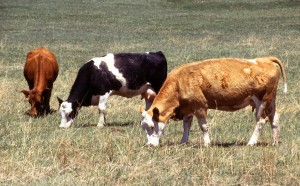 Clinical signs associated with ABPE are progressive. Animals may exhibit labored, shallow breathing, panting, an “expiratory grunt,” open frothy mouth and extended neck and head. These are all signs of an animal with impaired breathing. Inhalation and exhalation are difficult because of decreased elasticity of the lung. At necropsy, pathological changes are limited to the lungs, which are inflated, two to three times heavier than normal, firm and rubbery and dark red. The airways are filled with frothy edema fluid, and the lungs have a glistening appearance and contain large interlobular gas bullae.

Cattlemen should regularly observe pasture grazing conditions and be prepared to move animals to better pasture before cows exhaust their current feed supply. Cattle that have been allowed to remain on dry, overgrazed rangeland are prime candidates for contracting ABPE. These animals will be hungry. When given access to lush forage, they will tend to overeat. Research has demonstrated that after 2 or 3 weeks of poor quality forage (crude protein less than 6.5 percent and acid detergent fiber greater than 50 percent), the ruminal conditions become optimal for elevated 3MI production. Whether or not cows have been on overgrazed pasture, provide the cows with hay or other feed before a grazing transition.

The goal of preventative management is to provide a more gradual adaptation to the lush forage in the new pasture. Besides feeding hay, limiting cow access to the new pasture for the first few days will aid the adaptation process. This may mean daily moving cows onto and off the pasture.

If an outbreak of ABPE occurs, all animals should be removed from the lush pasture and fed good quality hay. Movement of sick animals should be minimal and done with care. Sick animals with ABPE have a breathing problem and should not be handled in a manner that will increase their need for oxygen.

Other possible causes of cattle mortality during these drought conditions occur because cattle are searching for forage and may eat plants or even buckeyes, acorns that they might have not normally eaten with good forage available. Plant toxicity is another concern after frost especially during drought conditions, which include Johnson Grass, locust, mint, cherry and many others.

Rainfall and drought comparisons of 2016 to 1925 Drought are at Cullowhee NWS Cooperative Observations Station. Nov. 10, is 27.43 and in 1925 was 23.51. Wildfires were an issue during that drought as well. Normal precipitation year to date as of November 10th at the Cullowhee station is 43.92.